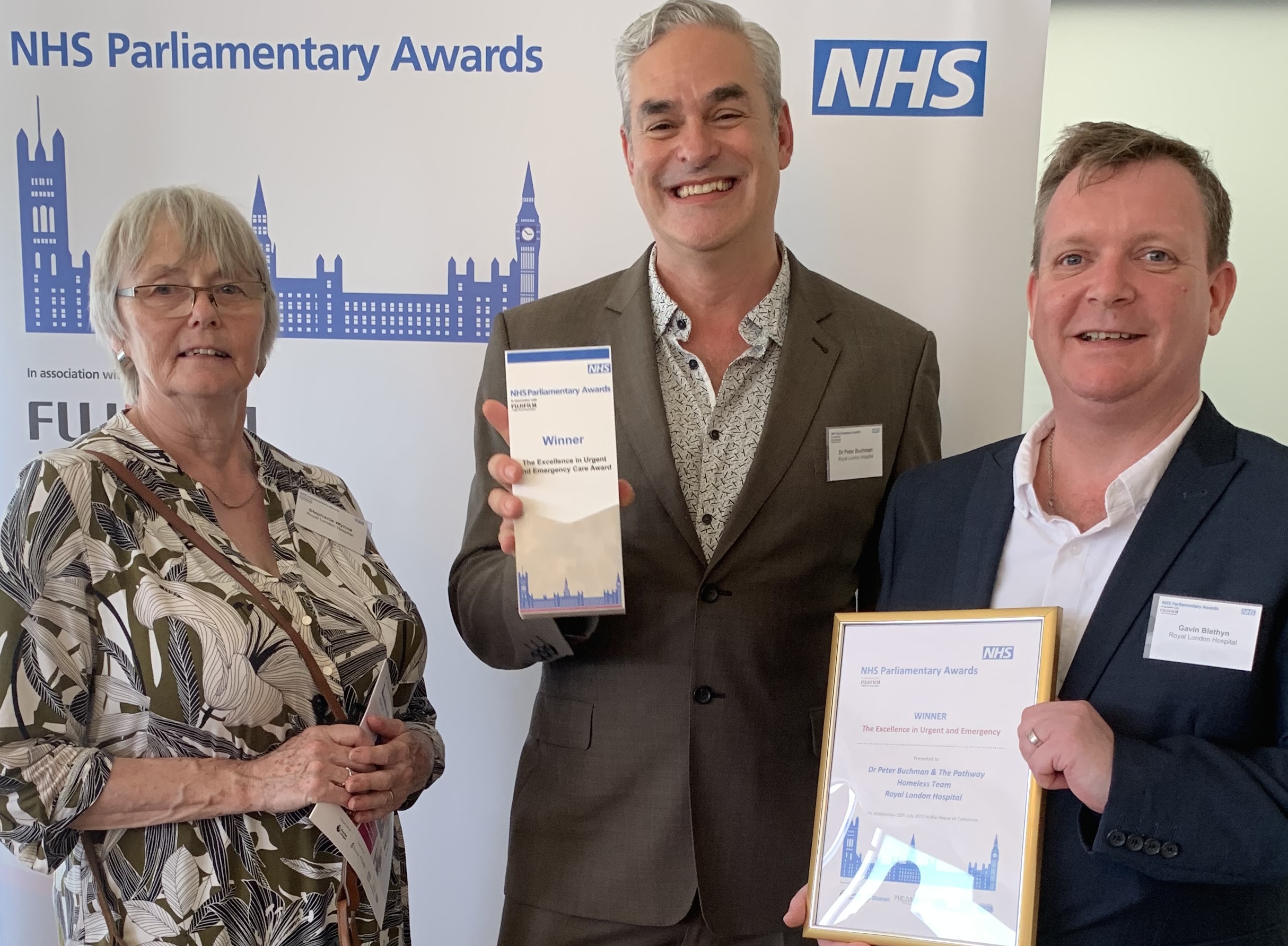 The Royal London Pathway team, who support homeless people in Tower Hamlets to live healthier, better lives, has today been awarded a top accolade in the prestigious NHS Parliamentary Awards.

Led by GP Dr Peter Buchman, the Pathway team has beaten the rest of the country to pick up the acclaimed Excellence in Urgent and Emergency Care Award.

Working at The Royal London Hospital and East London NHS Foundation Trust, the team were rewarded for their tireless work improving care for vulnerable homeless people.

The NHS Parliamentary Awards sees the NHS and MPs join forces to honour some of the biggest achievements in health and social care from across the country.

“We are absolutely delighted to win this national award. People who are homeless often have complex needs, so they can require support from multiple agencies. We work in partnership with health, social care, legal and housing professionals to really help patients get onto a better pathway in life. Thank you for recognising the work of our small dedicated team.”

Jim Fitzpatrick MP, who represents Poplar and Limehouse, nominated the team. He said:

“I am absolutely delighted that the Pathway Homeless Team​ are the national winners in the NHS Parliamentary Awards. This is well-deserved and a great example of joint working between ELFT, Barts Health and the Clinical Commissioning Group to truly support homeless people who are among the most vulnerable in Tower Hamlets. Congratulations to everyone involved.”

The Pathway Team are based at The Royal London Hospital and has the ultimate aim of ensuring homeless people cared for by the hospital do not get discharged back to the street, but instead are found other options for housing, healthcare and ongoing support in the community. When an individual admitted to hospital is ready to leave, the team will work to arrange a smooth discharge to a safe place.

The team also encourage rough sleepers and people in temporary housing to register with a doctor at Health E1 Homeless Medical Centre in Brick Lane in Aldgate.

“It has once again been a privilege to celebrate with some of the extraordinarily dedicated and selfless health and care heroes who make the NHS what it is today – the much-loved institution that our patients say is what makes them most proud to be British.

“From those who have devoted their lives to helping people and supporting some of our most vulnerable, to delivering pioneering lifesaving treatments, the NHS Parliamentary awards are rightly honouring those who continue to make a huge contribution to our country, through our NHS Long Term Plan.”