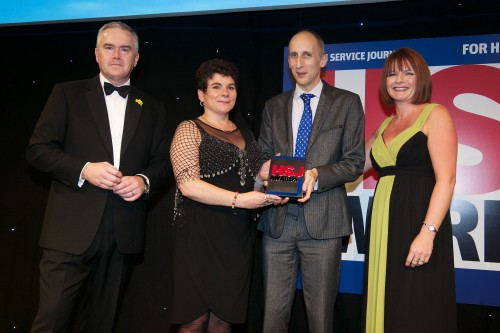 Pathway won national recognition this week when we were awarded the Health Service Journal Award for best Patient Centred Care project.  After a nail biting evening at a hotel on London’s Park Lane, with over 1,400 colleagues from right across the NHS, Kim Guest, from O2 health (sponsors of this category), announced that London Pathway had won the award.

The judges said that Pathway had “demonstrated how to make a real different to an often forgotten group of people.”

Speaking on the night Alex Bax said: “This award brings national recognition to an incredible team of staff – doctors, nurses and Pathway Care Navigators.  We now have Pathway teams in four UK hospitals and I hope that the publicity we get will encourage other hospitals to get in touch to see how we can work with them.  Our UCLH Pathway team would like to dedicate this award to a homeles patient called Wayne, who had been making great progress until his sudden death last weekend.”

The HSJ Awards Ceremony took place on 20th November 2012 at the Grosvenor House Hotel.  The evening was dedicated to rewarding those who have raised the standard of healthcare in the UK.  Pathway won the Patient Centred Care award ahead of eight other shortlisted projects.